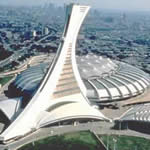 The Montreal Olympic Stadium is part of a large complex built for the 1976 Olympic Games including a 65.000 seat stadium, an Olympic swimming complex, more than 40.000mq training space, an indoor bicycle racing track, outdoor training facilities, accommodation for the athletes and large number of indoor parking spaces. Located about 7 Km away from downtown Montreal, the complex is well connected to the Montreal Transit System with two subway stations on site and good connections to the above ground bus network. The stadium itself is ellipsoidal in shape with a prestressed concrete roof cantilevering 60 to 80m over the stands. The central playground and the race tracking field are covered by a 20.000mq convertible fabric roof, anchored on the prestressed concrete roof, and suspended from a 168m high inclined tower. Finally, a panoramic funicular running on the back of the tower, gives access to a large observation deck, located on top of the tower. The combination of a large stadium, the highest inclined tower in the world and the largest convertible roof in the world, makes it a very unique structure that soon became one of the Montreal landmark.
Several local roof failures due to aeroelastic instability under non extreme wind conditions appear in 1988 and 1991.
A new cable stayed spatial steel framework was designed in order to replace the damaged membrane roof. This design collected all the previous problems related to the difficult boundary conditions, determined by the existing structure. The new roof of around 20.000 mq will be suspended from the inclined tower by 28 stray cables. Due to the particular boundary conditions and low ratio between dead loads and live loads the structural system, appears to be sensitive to differential stiffness between space frame ring and cable supporting substructure. It was necessary to proceed to an elastic and anelastic response of the roof system according to an oriented statistical 'simulations sensibility analysis in order to determinate the probability of failure and the b-index in function of parametric variations related to random uncertainties of the stiffness of cable stays. 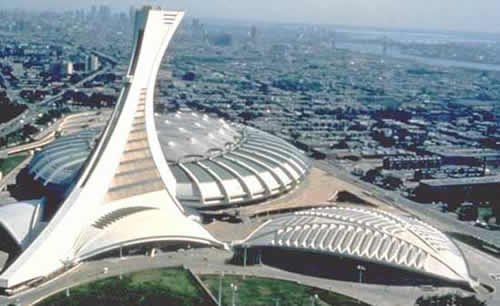