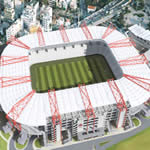 The Stadium occupies an area of approximately 32,000 m2 , in plan view, and has a seating capacity to accommodate 34.000 spectators. In addition to the athletic events area, the facility includes shopping center, restaurants, V.I.P. suites, offices etc. The steel structures, based on a reinforced concrete construction consisting of a deep foundation system and an above ground building facilities (that extend to the 6.44 m level), is formed by the grand stand upper level and his global roofing system .
For the design of the grand stands and main roof steel structure, the following aspects were taken into consideration:
- The  architectural conceptual design.
- The total coverage of the grand stands.
- Topologic and geometric arrangement of the spectator stands, taking into
consideration the elevation difference of the V.I.P. suites.
- The required very tight time schedule for the completion of the works,
imposing the utilization of simple methods of construction and erection.
- Cost optimization,  without compromising the structural quality, safety and
aesthetic appearance.
- Total manufacturing of the steel components in Greece.

Conceptual design of the steel structures :

-The grand stands supporting frame.
With a constant average separation of around 6 m (9 m at outer part), 70 plane frames are oriented normally to the rectangular play ground. The frames consists of a steel composite box beam 40 cm. wide and variable high, according the variability of the bending moments, from 30 cm to 120 cm; a central column of steel round pipe section and an external composite vertical column made of two parallel  tubes, able to support inside the separation the supporting connection detail of the stand beam.
The support stand beams , inclined according the visibility curve.are interconnected and wind braced every 5 frames corresponding to the main cantilever macrostructures.

-Secondary roof-covering support beams.
The secondary beams , radially oriented , support the roof covering system and are made of variable height rectangular box-section. They are supported at the one end from the triangular truss beam and, at the other end, from the vertical supports of the grand stand external columns. 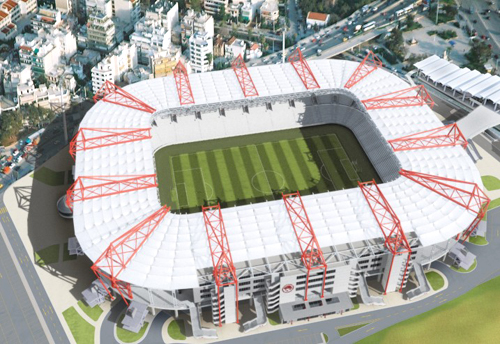 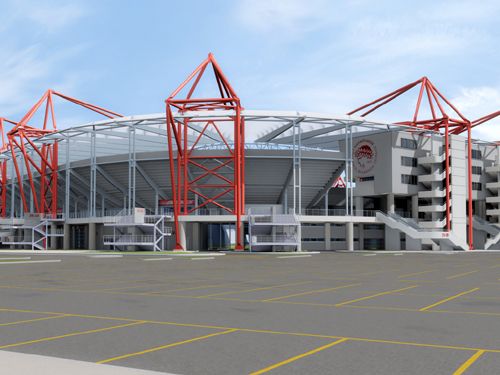